The spine can be divided into an anterior (front) column and a posterior (back) column. From an anatomical standpoint, the anterior of the spine is composed of the vertebral bodies which are separated by the intervertebral discs. Discs are the spacers that separate the bones and provide cushioning and shock absorption. 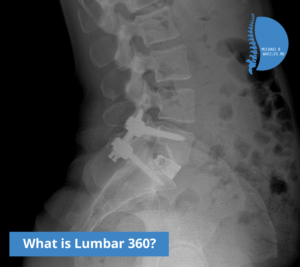 A posterior spinal fusion involves fusing the posterior, or the back of the spine. The back of the spine has less surface area for fusion. When a fusion is performed from the posterior aspect, surgery involves fusing the facet joints or the lateral gutter (which involves fusing the transverse processes to one another). Posterior fusions generally require placement of pedicle screws. Pedicle screws are screws that are placed safely into the bone from the back that allow us to stabilize the Individual vertebra of the spine. By placing screws into the bone and connecting them to rods, we are able to stabilize the spine. Posterior fusions generally also require placement of bone graft into the structures of the back of the spine that allow for the individual bones to heal/adhere to themselves. Often, the posterior portion of the fusion is done using a posterior instrumented navigated fusion which is a minimally invasive technique the allows placement of the screws into the back of the spine using specialized technology that minimizes tissue disruption, lowers blood loss, improved healing times and allows for patients to get up on their feet quicker.

A lumbar 360 involves both of the techniques in which the anterior and posterior aspects of the spine are fused together. The most powerful portion of this procedure is the anterior fusion, either the ALIF or the lateral interbody fusion. Lumbar 360s are very powerful procedures and have high union rates, meaning that the bones have a very high chance of healing.

Common reasons a lumbar 360 is performed include lumbar spondylolisthesis with lower back pain, spinal instability, degenerative disc disease, scoliosis, and several other problems.